Beating the Bounds will take place on Sunday 22nd May 2022 departing from the Parish Centre car park at 2 pm.

‘Beating the Bounds’ is a traditional custom that has been carried out in parishes for hundreds of years. The purpose of the exercise is to acquaint everyone with the boundaries of the parish by walking them, and to pray for the protection of the parish in the forthcoming year. In particular, children were bounced on their heads at strategic points to help them remember! By tradition, ‘Beating the Bounds’ takes place on Rogation Sunday.

In Chesham Bois, we hold an annual ‘Beating the Bounds’ walk, which is an opportunity to get to know more about the parish in a convivial group. 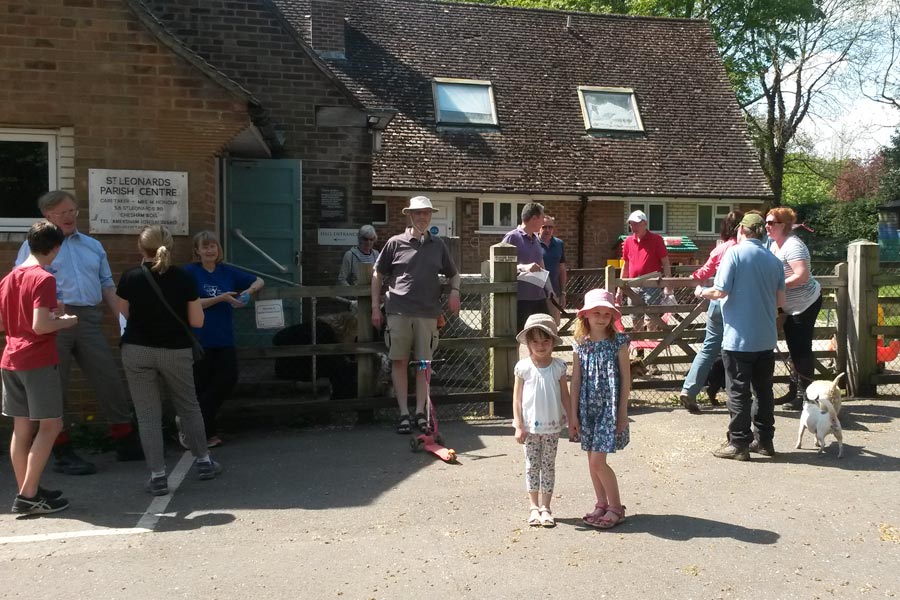 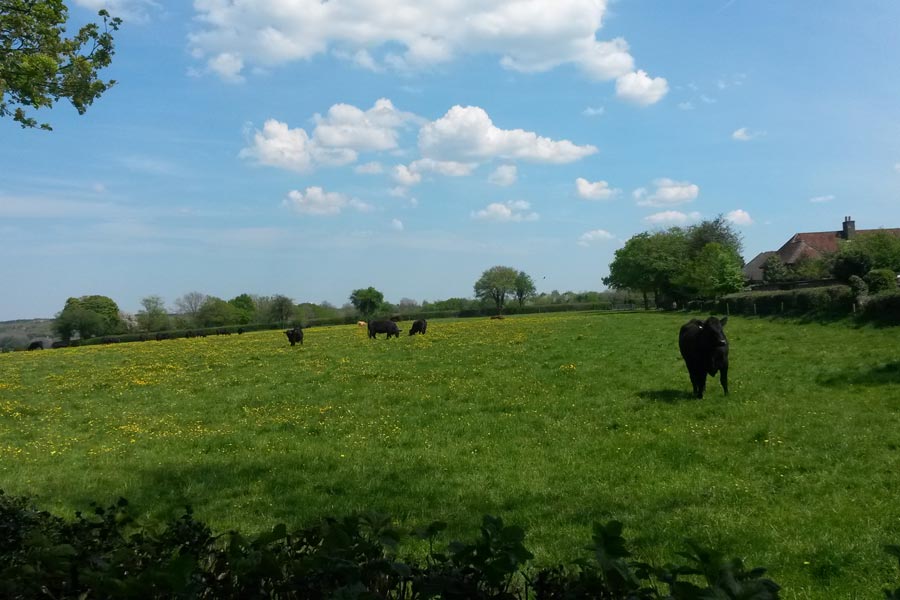 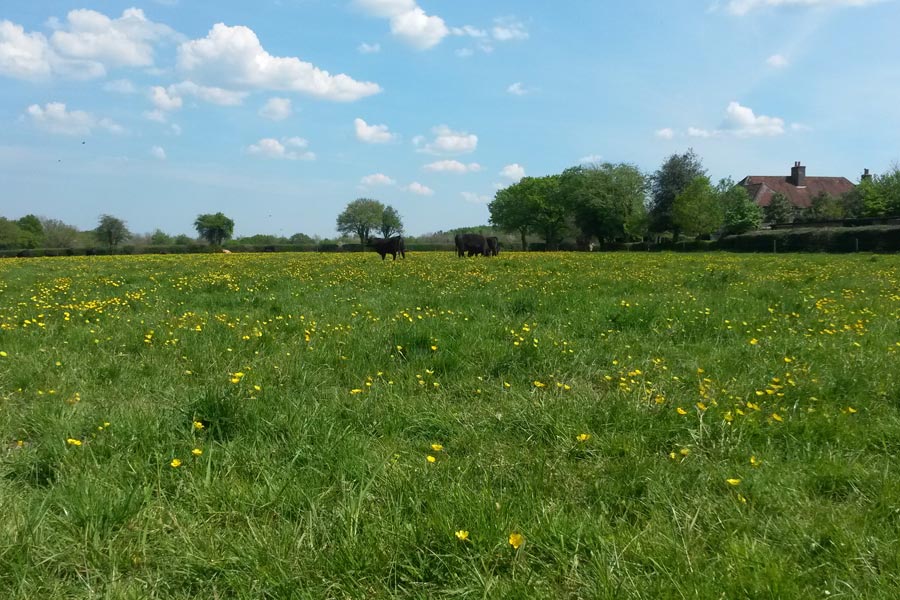 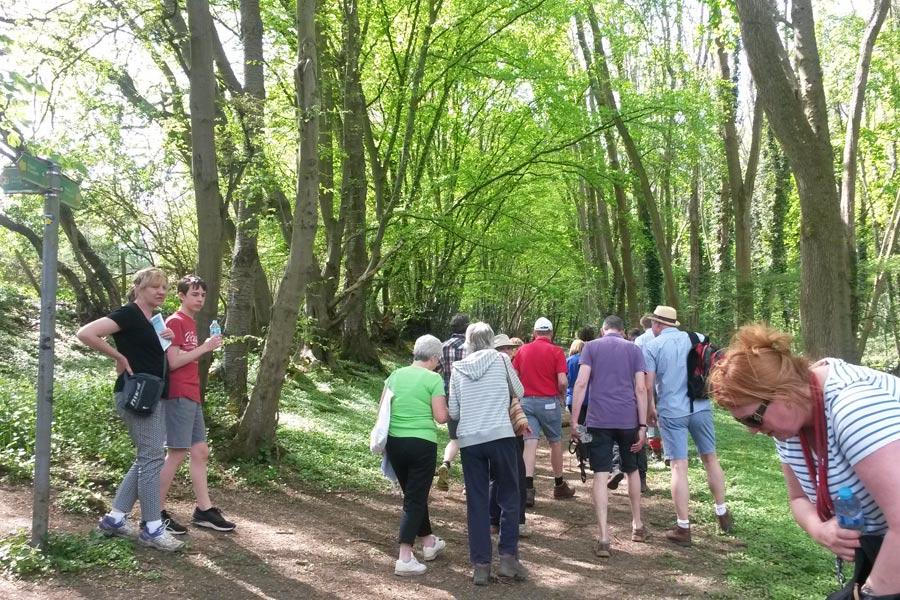 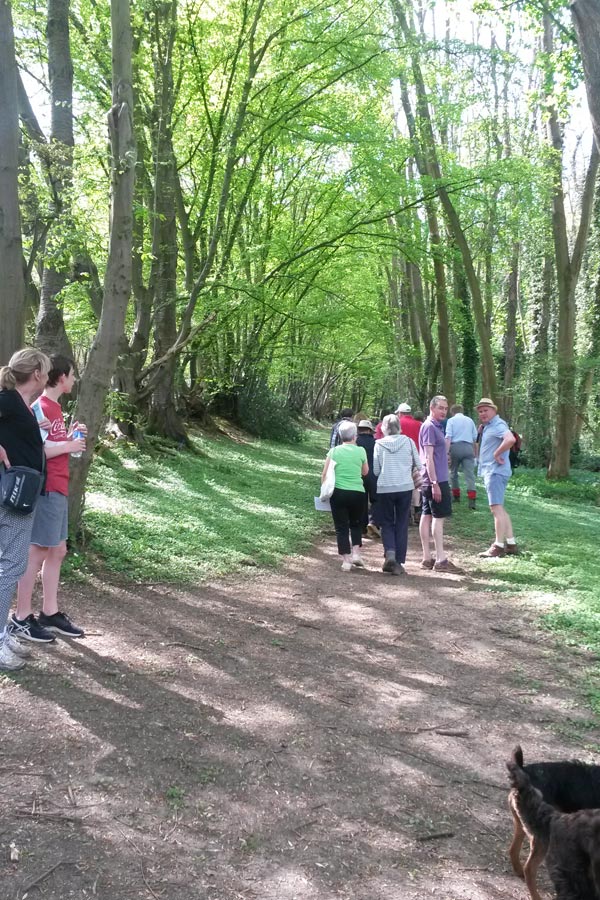 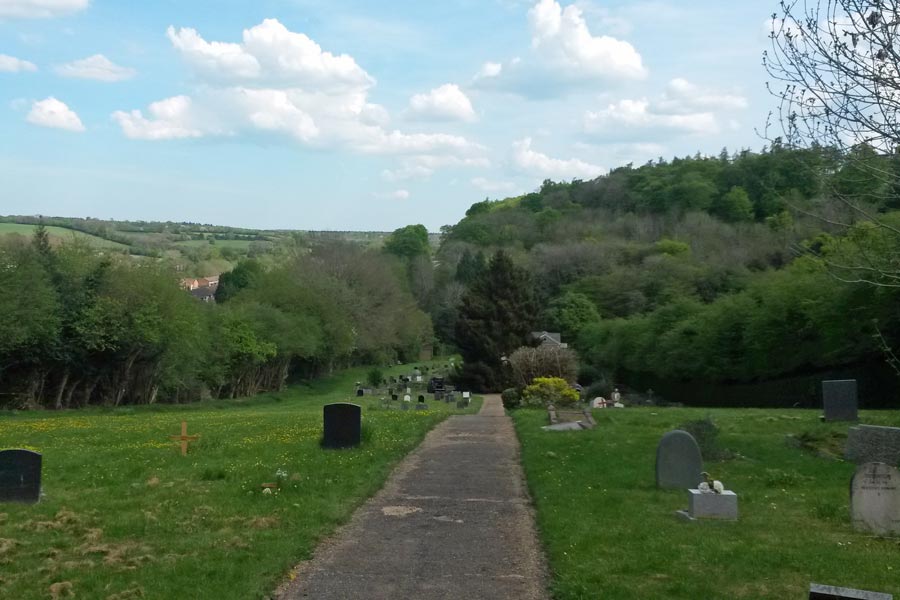 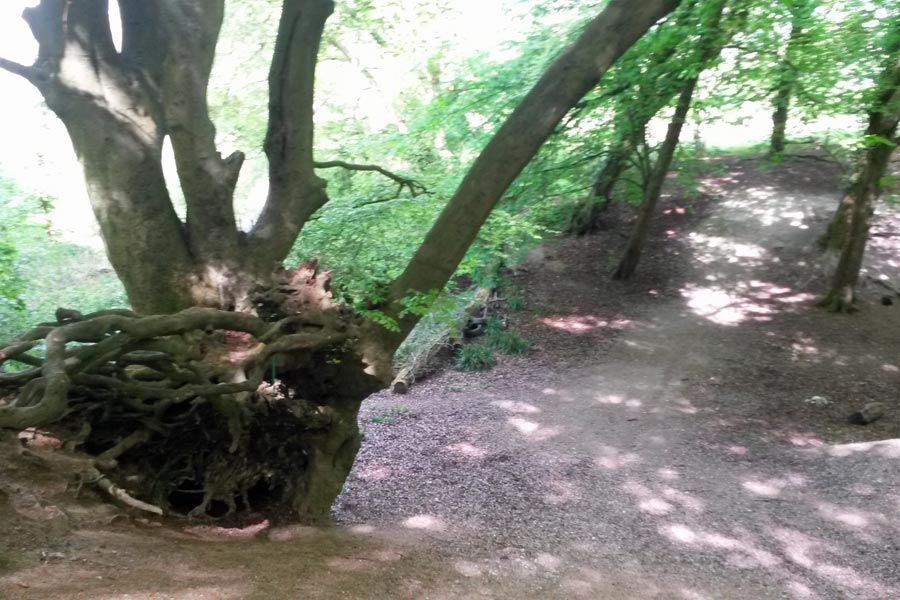 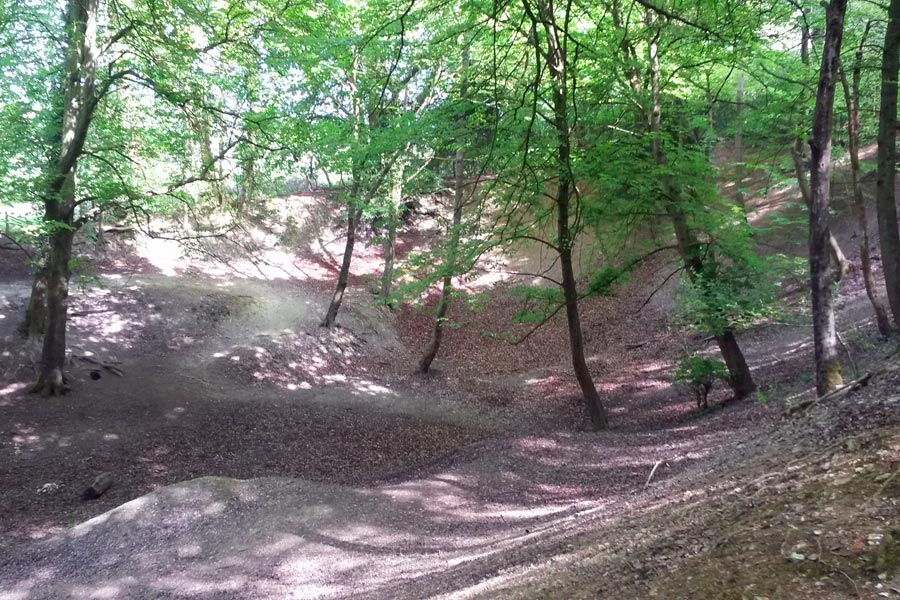 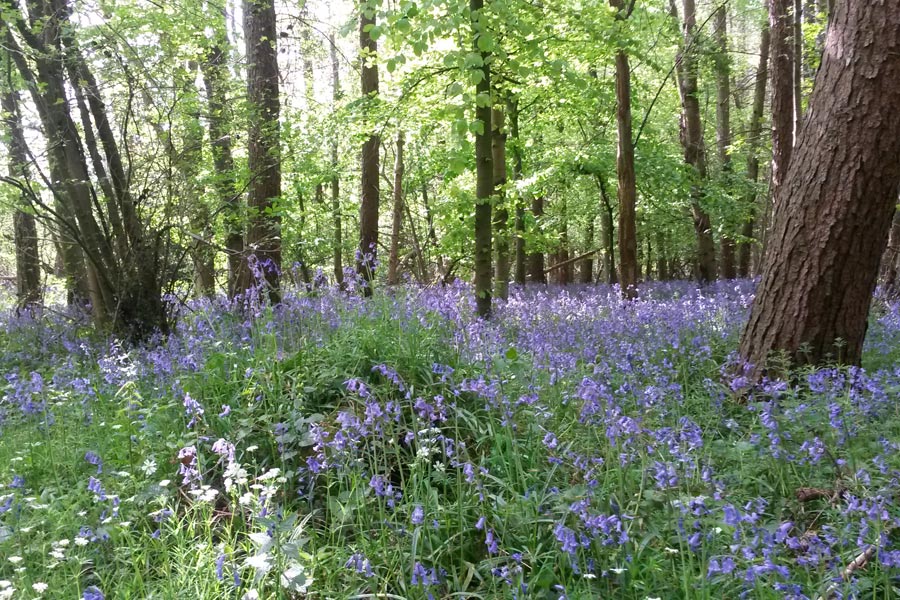 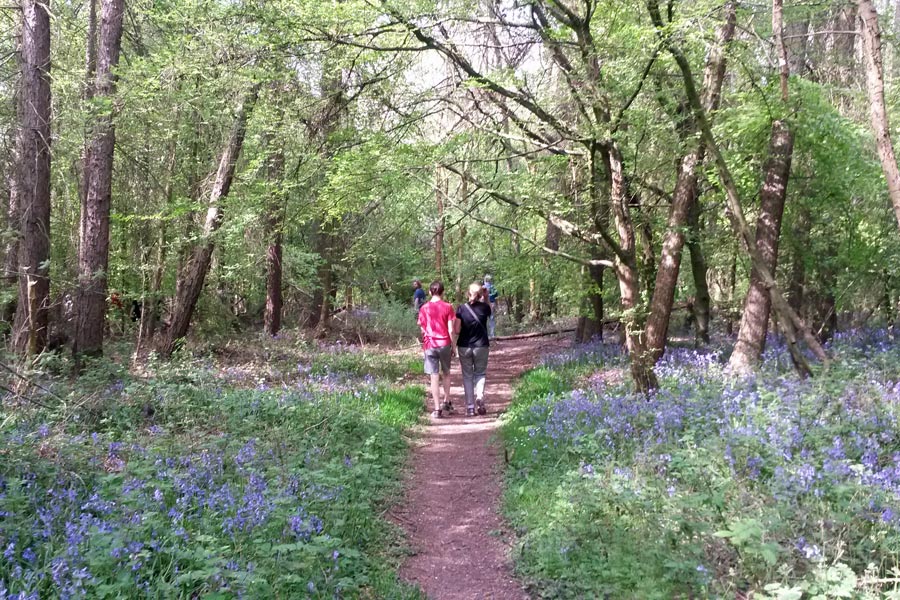 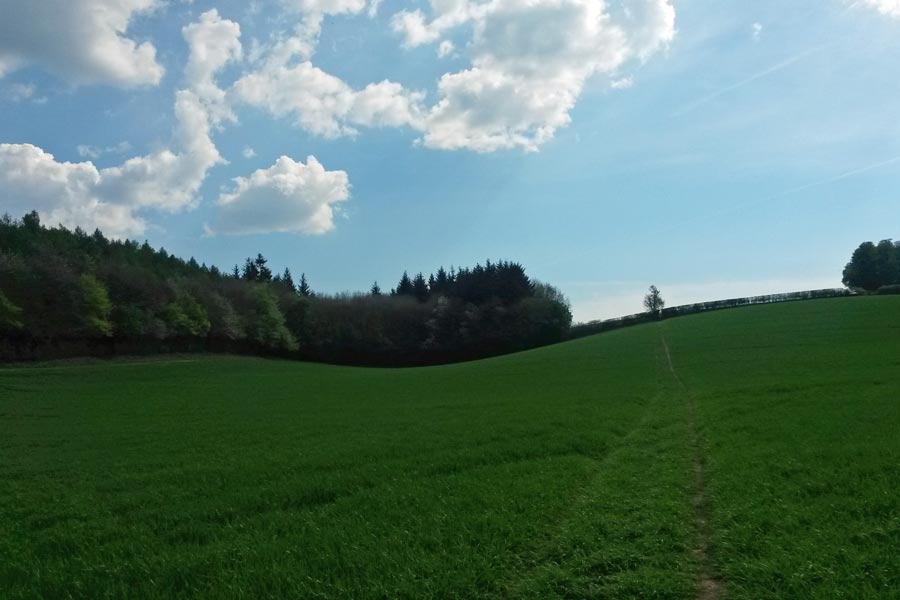 If you’d like to do the walk yourself, there are notes below. Beating the Bounds Leaflet.

The walk begins at the Parish Centre, where parking is usually easy. As the walk is on footpaths, it is recommended that sensible footwear be worn. There are a number of stiles, kissing gates and a steep stepped footpath, which make access for pushchairs difficult.

Starting at the Parish Centre, turn right into Glebe Way, right again into Bois Lane, then cross to Chestnut Lane.

1. The Old School House on the corner of Bois Lane and Chestnut Lane was built from brick and flint in 1846 on land donated by the then Lord of the Manor, the Duke of Bedford. Local subscriptions raised the £150 needed to build the school and attached accommodation for the schoolmistress. It remained as a school until 1894 when overcrowding led to a larger school being built further down Bois Lane.

Continue along Chestnut Lane, (where, at Parkfield Avenue, you enter Amersham), until you reach New Road. On your left is a path which crosses Stubbs End Close and leads to the eastern end of Stubbs Wood. You are now back in the parish. Keeping the field on your right, follow the footpath down the hill until you reach the valley bottom.

2. On your right is a tunnel under the railway line, a favourite for generations of children for the quality of its echoes!

Turn left and follow the track through Blackwell Stubbs. At St Leonard’s Road turn right and continue until you come to Hollow Way Lane.

3. Hollow Way Lane is part of an ancient trade route coming down from Ley Hill across the River Chess and continuing through Amersham, on to Penn and then towards the south coast.

Cross the road and slightly up the hill is a track, which goes between the backs of Gayton Close and Runrig Hill. Follow this track to Bois Lane.

4. On your right is the Pioneer Hall, headquarters of the 1st Chesham Bois Scout Group. Our Scout Group is the second oldest in the country, having been formed in 1908. The original Pioneer Hall built in 1921 in memory of the eight Group members who were killed during the First World War, burnt down 10 years later, to be replaced the following year by the present building.

Turn left into Bois Lane and on your left is Chesham Bois C of E Combined School, built in 1894 on land donated by Lord Chesham, and recently extended. Take the next right into High Bois Lane, which leads to St Leonard’s Parish Church.

5. The church’s chancel at the east end, dating from the 12th century, is the oldest building in Chesham Bois. The church has been the subject of alterations and extensions down the centuries, but maintains the original flint and chalk character of the earlier chapel.

6. The land falls away sharply and the path descends down steps known as Jacob’s Ladder.

At the bottom of the footpath turn left then right into the Chesham Bois Burial Ground.   Walk past the chapel on your left and climb the hill to a bench at the end of the concrete path.

7. Owned and maintained by the Parish Council, the chapel is used for funeral services and also by the congregation of St Leonard’s Church. The burial ground dates from 1928. The view from the top looking across the Chess Valley and Great Bois Wood is well worth the climb.

Go behind the bench and bear right to leave the burial ground by a kissing gate in the corner.  Follow the well-worn path straight ahead.

8. After 160m you will see a kissing gate and memorial sign, where Thomas Harding, the Protestant martyr, was arrested in 1532.

Ignore this kissing gate and keep straight ahead, keeping the fields on your right, follow the track, which leads past Aldridge’s Dell.

9. Take great care, as there is a sheer drop over the edge into a large hollow. In the past, there was a kiln here. Chalk dug from the dell was burned in the kiln and sold to local builders. They slaked the lumps in water to make a cream like paste, mixed it with sand to make mortar for laying bricks, and with cow hair and fine sand for plastering walls.

Follow the path and you will join the main Amersham – Chesham Road. Cross the road and go up the hill for about 30 metres until there is a Woodland Trust sign on your right. Follow the track through the woods, and where the paths cross, go straight on. The path bears slightly to the right and there is a field on your left.

10. On your right is a gully, this is part of Beech Lane, once the main road from Amersham to Chesham.

With the farm buildings on your right, continue between the hedges and turn right at the end. After about 50 metres turn left down the farm track. At Copperkins Lane turn left. Continue down the road to the roundabout and turn right then immediately left down South Road.

12. On the left you can see the home of Chesham Bois Cricket Club. This open space was the site for open-air religious festivals in Victorian times. One rally in 1857 attracted nearly 1,500 people.

At the end of South Road turn left, then left again into Glebe Way and the Parish Centre.

If you’d like to do the Beating the Bounds walk yourself, there are notes below. Beating The Bounds Leaflet